A good atmosphere, plenty of sun and runners from a large number of companies in the region – that was the 6th DAK Company Run in the Eintracht Stadium in Braunschweig. BUTTING employees were on the starting line at the end of August too. 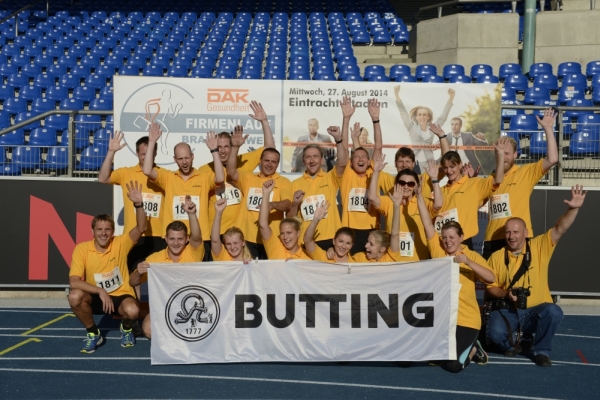 17 BUTTING runners had registered and travelled together to the sporting event. Almost 2,000 sporting enthusiasts from around 130 companies in the region aimed to conquer the 4.6 km route. Most participants were focused not on high performance but rather on running for pleasure and the subsequent "networking".

Times were measured both for individual participants and for companies as part of a team competition. BUTTING Managing Director Dirk Meinecke was the fastest runner from the family business and achieved an impressive 11th place in the individual times of all the participants. Just behind him, Michael Erlhoff, an employee from Store/Dispatch, came in 12th place in the individual competition with a fantastic performance.

Catharina Heine, responsible for occupational health and safety at BUTTING, takes a positive view: "There was a good atmosphere and the local organisation was excellent".