In 2009 another partner company joined the BUTTING Group: BUTTING Brasil Soluções em Tubos Especiais Ltda. When a sales office was established in Rio de Janeiro/Brazil, an important step was taken towards a greater presence in this emerging country. Five years later, we are setting a new milestone in the most populous country in South America: setting up single-part production. 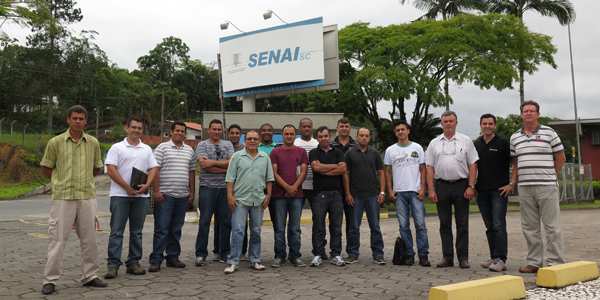 In the second quarter of this year, we will take a new workshop in Brazil into service, in which vessels, tanks and ready-for-installation components are to be manufactured from corrosion-resistant and clad materials. The chosen site in the Joinville / Santa Catarina conurbation is on one of the most important main roads of the South American country, amidst a rapidly growing industrial estate near the harbour of Itajaí.

Led by an experienced project manager, since last year all the necessary measures for the impending opening have been taken. For example, the rented industry hall has been adapted to the appropriate quality and safety standards. The necessary machines are being purchased at the moment. In addition, the required environmental and operating authorisations are being applied for from the responsible Brazilian authorities.

The administrative staff have already undergone a training programme at BUTTING’s headquarters in Germany. The experts for the production area are at present gaining their qualifications for the specific requirements of BUTTING locally in cooperation with the SENAI education centre. After they complete the theoretical part at SENAI, staff will continue their practical training with us in our own production hall, led by experienced colleagues from Knesebeck.

The new BUTTING presence will now allow “prefabrication” to be offered on the Brazilian market. The workshop will focus initially on the production of prefabricated pipes and spools for the oil and gas industry – with the appropriate production procedures and quality standards. We are also focusing on other industries that require such materials: pulp and paper, energy technology, shipbuilding, the chemical and petrochemical industries.

Richard Brandes, the managing director of Butting Brasil, explains: “We are delighted to be able to offer on the Brazilian market, on a large scale, the quality and expertise acquired in more than 235 years of German corporate history." The first order for 6 FPSOs has already been received in Santa Catarina. A crucial role in receiving this order was played by the fact that BUTTING can now offer “local content” thanks to its presence in Brazil.